Tamika and her husband met online when they both swiped right on the app Tinder! What a modern-day love story. They quickly got along well and, you know what’s next…here we are discussing their beautiful love story!

Tamika’s husband Chris took her on an extravagant weekend getaway to Chateau Lake Louise in February of 2017. She says the weekend was something out of a fairy-tale. Little did she know this fairy-tale would become a reality as Chris was planning on proposing. They went skating on Lake Louise and at night they sat around a bonfire and watched the stars.

One night, Chris had told Tamika to put on a nice outfit for dinner and he had done the same. They walked down to the Mount Fairview restaurant and enjoyed a romantic dinner with some
champagne and delicious food. After dinner the couple was walking back to their hotel and Chris was making small talk and he began to walk slower and slower until he was stopped in the
middle of the hotel lobby. “Wait here” he said to Tamika as he began to run up the beautiful grand staircase in front of them to the second floor.

A few minutes went by, which to Tamika let like FOREVER! Finally, Chris began coming back down the staircase with his mouth grinning ear to ear. He met her back in the middle of the lobby and grabbed her hand and they both walked back up the stairs. Tamika said she was so confused at this point and she began asking him what was going on.

Halfway up the staircase she started to hear a song play out loud. It was their song, Yours, the wedding version by Russel Dickerson. Everything went blurry for Tamika in this moment! She couldn’t believe it! Chris got down on his knee and asked, “will you make me the happiest man alive?” From there it is history.

Throughout the weekend Tamika had a slight feeling that Chris was going to propose to her. She would catch him smirking towards her and acting unlike himself at certain times, he was
being so romantic all weekend long. Though she had a feeling it was coning she was still speechless and responded to Chris with a head nod!

The couple would later get married on August 18, 2018. The ceremony was held at Tunnel Mountain Meadow in Banff, Alberta. Her absolute favorite memory of their wedding was the first look they had with each other. They took each others breath away and took in the beautiful moment. 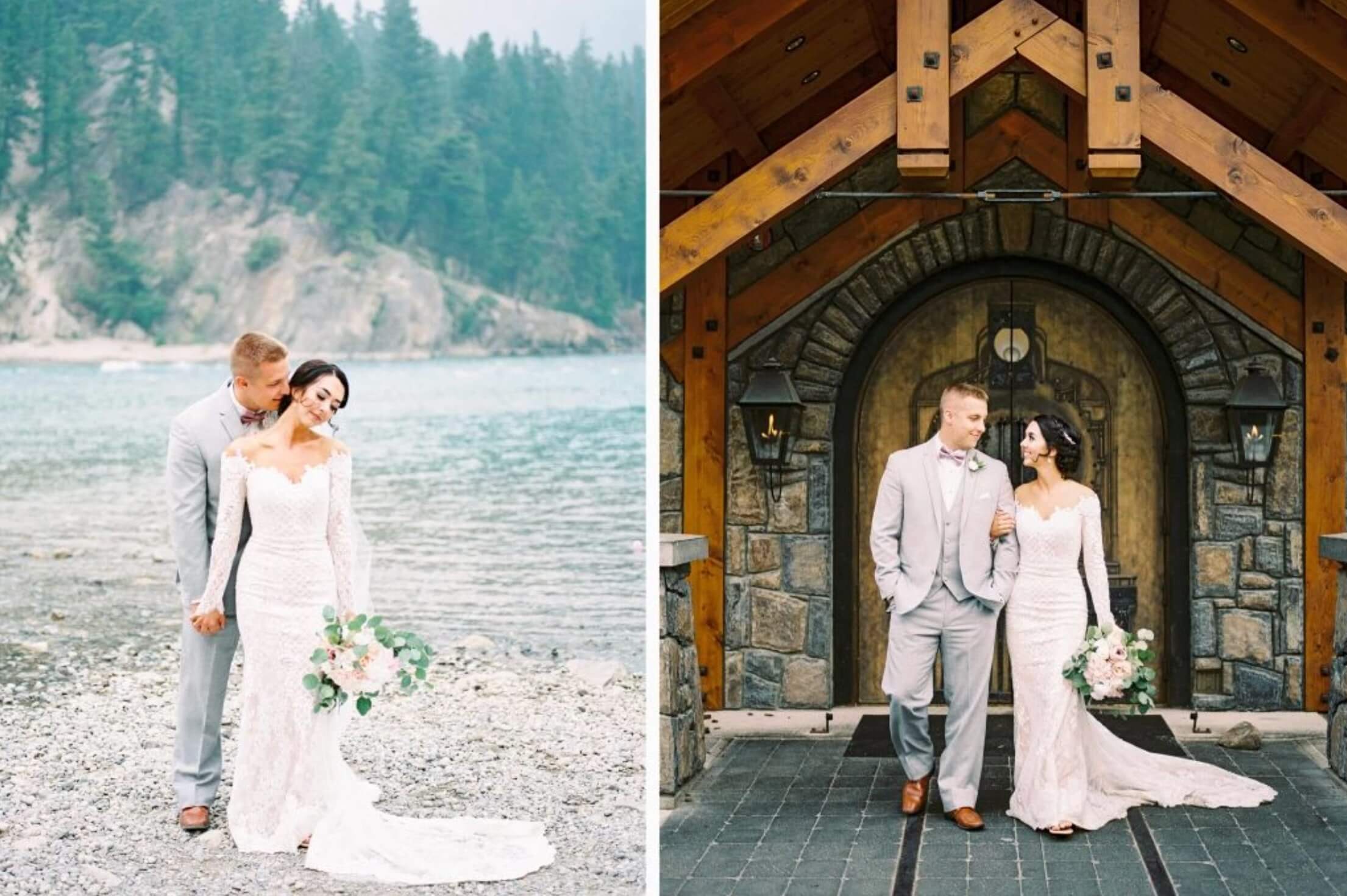 Tamika bought her dress form the Bridal Boutique in Edmonton, Alberta. The detailing on her dress made her fall in love. She was looking for a form fitting, long sleeve, lace gown, but didn’t realize she could have both traditional, and modern laces all in one gown. The neckline also drew her in, she loved that the netting was almost invisible. Tamika explained she tried on many dresses at larger department stores, but she didn’t like that she could see most of the stitching within the gowns. She was starting to believe she wouldn’t find an off the shoulder, long sleeve dress with invisible netting until she found the L’amour Collection! Tamika is wearing gown ‘Alicia’ in style 16246.